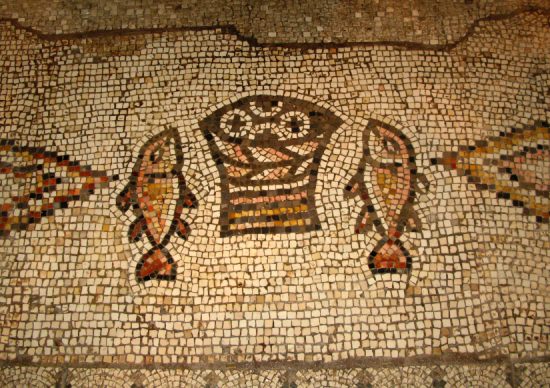 Tabgha is an area located on the north-western shore of the Sea of Galilee in Israel. It is widely believed to be the place of the miracle of Jesus feeding the five thousand, where Jesus delivered the Sermon on the Mount on the hill above the site, where He called out to the apostles in the fishing boat after His resurrection, and where he commanded Peter, “Feed My Sheep.”

The name Tabgha is derived from the original Greek name, Heptapegon, which means “Seven Springs” (in Hebrew it is known as Ein Sheva). Seven warm, sulphurous springs flow from this area into the Sea of Galilee which have created a higher concentration of algae at this point on the lake, attracting numerous fish. For this reason, Tabgha has been a favorite fishing spot since ancient times.

The earliest building at Tabgha was a small chapel built in the 4th century A.D. (around 350) by the Jewish convert to Christianity, Joseph of Tiberias. Following his conversion, Emperor Constantine gave him the rank of count, and gave him permission to build churches in the Galilee, specifically, in Jewish towns which didn’t yet have a Christian community, and at that time, the Galilee was largely under a Jewish majority.

The chapel was rebuilt into a much bigger version in 480 by Martyrius of Jerusalem, who was of Egyptian origin, and hence the Nile mosiac floor, of the famous fish and loaves. Some believe that Jesus stood on a rock adjacent to this mosiac, when he blessed the fish and loaves just before the feeding of the huge crowd who had come to hear him.

The Church of the Multiplication was restored in 1981, with the original mosiacs also part of the restored church.

Sadly, in the summer of 2015, vandals set fire to the church and the damage has been quite severe.

However, all is not lost: one place that we can still visit in Tagbha is the Church of the Primacy of St. Peter, just north of the Church of the Multiplication. This was the place where Jesus appeared the fourth time after his resurrection, during which Jesus again conferred primacy on Simon Peter. In addition, the promenade walk between Capernaum and Tabgha is a sight for sore eyes!

The fire in 2015 has caused us great sadness, but we hope and pray that we will be able to once again show you the delights of Tabgha very soon as part of your Holy Land experience.

Why visit the Holy Land?

The Holy Land, Ein Gedi Why should all Christians visit this fabled destination? The Holy Land is where it all started; the...
Read more

Multiplication mosaic, Tabgha, Israel “We have here only five loaves and two fish.” – Matthew 14:17 Tabgha is an area located on...
Read more

Bethlehem: a must-see on any visit to the Holy Land

The small Judean city of Bethlehem is perhaps one of the most beloved cities in Israel for Christian pilgrims; for...
Read more