We often get asked about the weather in Israel, especially during the cold winter months, and surprise many with our answer!

Because despite the mercury rising almost intolerably through the summer months, winters in Israel can be surprisingly cold! And we’re not just talking about wearing long pants or socks, we’re talking full-on heavy coats, scarves, and even gloves. Yes yes, when the cold really comes to town, there’s even some snow to enjoy!

Oh yes, nature’s finest white flakes typically visit Israel every winter, especially in the far north. If you didn’t know already, the far north of Israel hosts Mount Hermon, Israel’s only ski resort – and yes, they are usually open for a few weeks every winter!

Israelis tend to complain a lot about the cold weather when it arrives, though we’re sure it’s never quite on the scale of a real American or European winter. That’s what too much sun does to you, it spoils you 🙂

There is something magical about some of those holy places getting a dusting of snow however, particularly sites like Jerusalem and Bethlehem. If you are ever over here in the winter months, the picturesque views of a snow-capped Old City might just leave you spellbound…

This weekend has seen a flurry of snow showers return to the far north, after what has been a couple of glorious weeks (our recent Pastors Tour can confirm!), so we thought we’d share a few photos we took in the snow. And yes, those are snow surfers in the second photo! 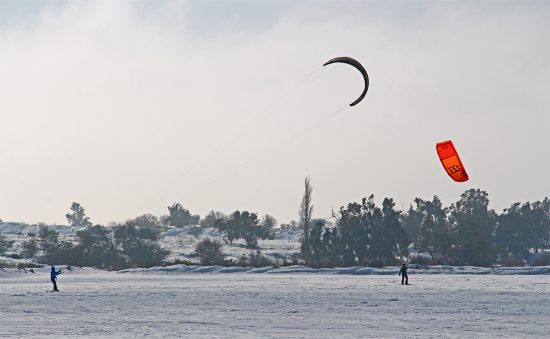 When you think about it, it’s actually quite amazing to think of snow settling here in the Holy Land. The Bible surprisingly has numerous references to snow, though not too many referring to the biting cold…

Here are just some of the snow references in the Bible, recognize any of them?

And the LORD said furthermore unto him, Put now thine hand into thy
bosom. And he put his hand into his bosom: and when he took it out,
behold, his hand was leprous as snow.

And Benaiah the son of Jehoiada, the son of a valiant man, of Kabzeel,
who had done many acts, he slew two lionlike men of Moab: he went
down also and slew a lion in the midst of a pit in time of snow:

Which are blackish by reason of the ice, and wherein the snow is hid:

If I wash myself with snow water, and make my hands never so clean;

Drought and heat consume the snow waters: so doth the grave those
which have sinned.

For he saith to the snow, Be thou on the earth; likewise to the small
rain, and to the great rain of his strength.

His appearance was like lightning, and his clothing white as snow.

As the cold of snow in the time of harvest, so is a faithful messenger to
them that send him: for he refresheth the soul of his masters.

For as the rain cometh down, and the snow from heaven, and
returneth not thither, but watereth the earth, and maketh it bring forth
and bud, that it may give seed to the sower, and bread to the eater:

Will a man leave the snow of Lebanon which cometh from the rock of
the field? or shall the cold flowing waters that come from another
place be forsaken?

What does the Holy Land tour package include? The itinerary is rich with exciting activities. From your arrival at the...
Read more

Are you looking forward to traveling in Israel? If you are Jews or Christians who live in North America, we...
Read more

What do Holy Land Jerusalem tours include? These tours vary, and can includes sites holy to Jews, Catholics, Greek Orthodox...
Read more